Popular
Lenovo Legion Y740 Review
How Does a Telecommunication System Work?
Six Ways to Boost your E-Commerce Sales Using...
How Can One Use Laptop as a Monitor?
What is Special about 310 Detox Tea and...
Discovering the potential in TruVision Health Supplements
Why is Vitamin D in My Diet Shakes?
The best espresso machine, grinder and accessories for...
New Horizons probe captures images at record distance...
The Morning After: Cryptocurrency’s security problem
Home Tech Technology as racial exploitation in ‘Black Gooey Universe’
Tech

Early computers were developed by and for programmers to do a variety of specific tasks and featured black screens with white or green text. All of that changed following the “mother of all demos” that introduced the mouse and graphics user interface, aka the GUI or “gooey.” “Between the Xerox Alto and Apple Lisa, the negative space of the screen began to appear white, replacing the black command-line interface used on computers prior to that,” American Artist notes.

That tech was ultimately simplified and popularized by Apple, which introduced it to the world in 1979 with the world’s first “GUI” (graphical user interface) computer, the Apple Lisa. That idea has been carried forward, and highly refined, to the smartphones of today.

The skeuomorphic interface puts a friendly face on computing, but has the effect of obscuring the complex technology and history behind it. Its development has created a shorthand communication system between humans and machines, as conceived by the mostly straight and white males in Silicon Valley. That, the artist believes, has been problematic and serves as an analogy for the history for America’s history of race relations. 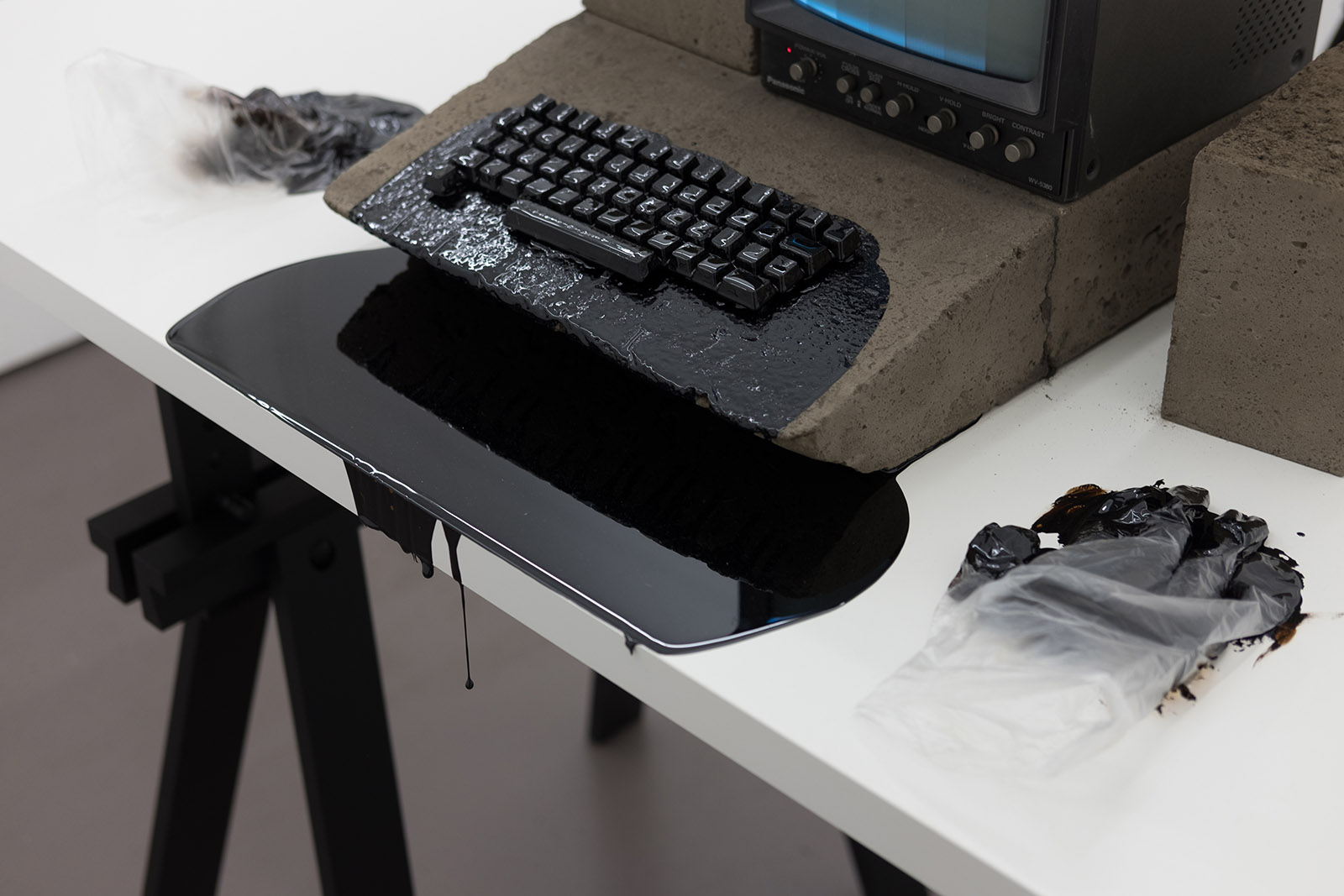 2018, all images courtesy American Artist and HOUSING
“Racial Slavery — which generated Blackness as a site of permanent extraction, gratuitous physical violence, and social death — provided the material and ideological basis for the United States,” writes American Artist. “Unsurprisingly, Silicon Valley advances this constitutive anti-blackness through its technological products and processes.”

As counter-programming, Black Gooey Universe mimics the GUI name, but presents “Blackness as counterpuntal and primordial to the whiteness of the screen,” the artist writes. “No State,” for instance, shows broken black iPhones presented as a if slabs in a cemetery, with the global trade for the devices symbolic of how African Americans were trafficked in the 1800s.

Other pieces play further on those themes, with “Mother of All Demos” showing a Panasonic monitor on cinder blocks and a crude keyboard oozing black fluid. That plays on the name of the famous demo, but adds a sober subtext, relating it to black mothers who bore the slave industry’s children that made industrialization, and subsequently modern technology, possible.

You can see all the pieces for yourself at HOUSING in Brooklyn, NY until February 16th. If you want to better understand the themes, the closing reception on Friday, February 16th at 7:00 PM will feature a conversation between writer and curator Eileen Isagon Skyers and American Artist.

The ‘Spire’ portable recording studio is all about spontaneity

How Can One Use Laptop as a Monitor?

Some of the Best Home Theater Projectors

The ‘Spire’ portable recording studio is all about...

The Morning After: Cryptocurrency’s security problem

How technology is affecting the refugee crisis